As soon as you select a folder, album, or smart album in the sidebar, the brand new Focus Bar will appear at the top of the browser.

It gives you a good excuse to collapse the sidebar (⌘0), and focus on that one area of your library, for example a single album. If that album contains stacks, and you select one, the Focus Bar will show an additional button: Focus on Stack, which when clicked (or by pressing ^⌘[) will take your focus to the stack itself and the images it is made of.

When focused on a stack, the Focus Bar displays three nifty buttons that allow you to quickly select the stack’s pick image, all images comprising the stack, or the stacked image itself.

That’s a lot of extra image data, and to help you get a hold of it, you can now filter the search results. For example, if you only want to include images obtained with the Hubble ACS instrument, you might enter “ACS” in the new text field towards the bottom of the Virtual Observatory. 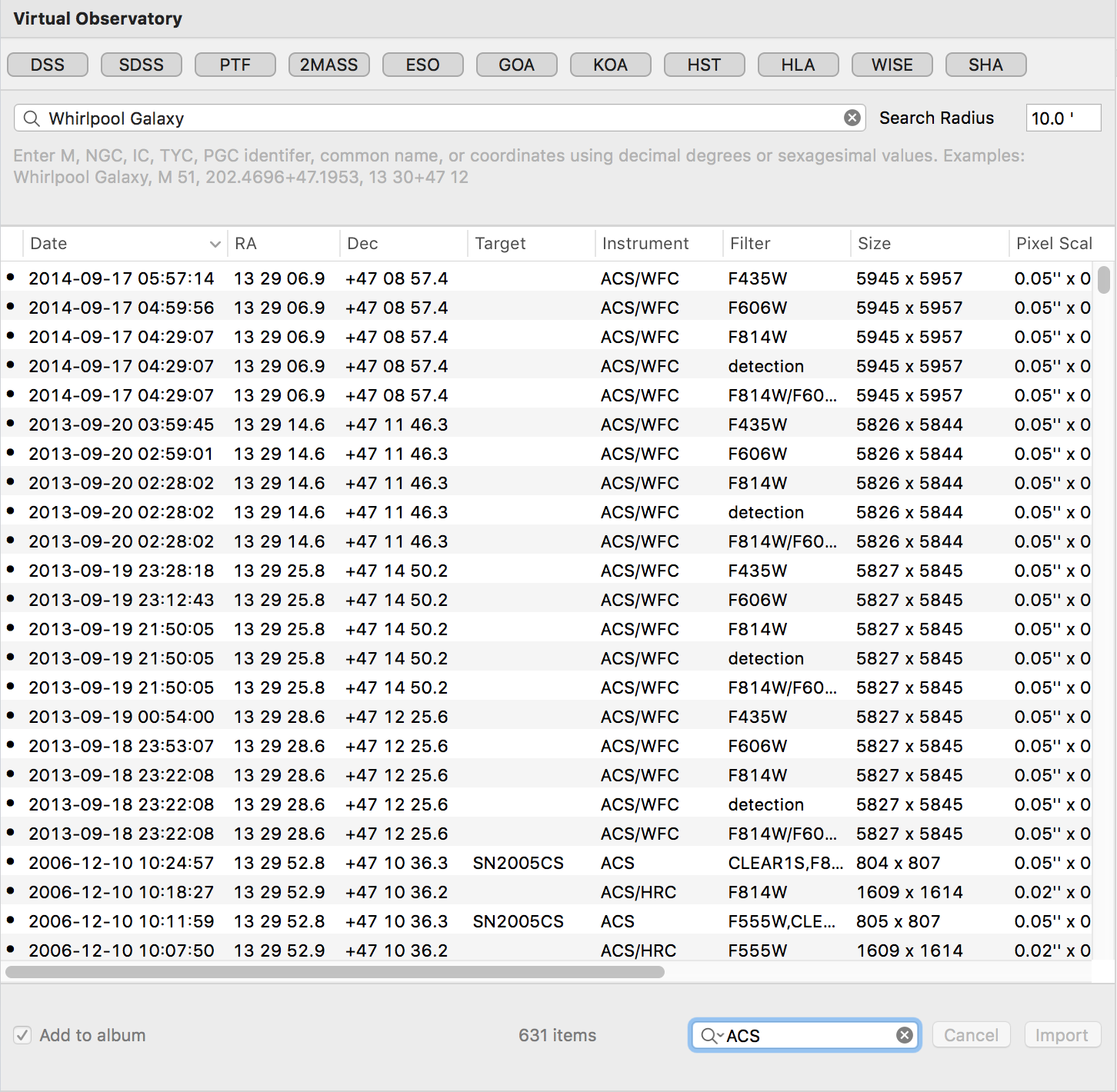 We’ve made improvements throughout the application. For example, the “Edit” button in the inspectors was in the way of efficient metadata editing, so we removed it. You can now double click stacks and images to quickly focus on them. And importing folders of images doesn’t create superfluous folders in your library anymore.

Today we released Observatory 1.0.3. As announced in the previous blog post, it now includes Spotlight Importers for FITS and SBIG files. This means that, when choosing File ▸ Get Info (⌘I) for such files in Finder, it will now display useful information like image dimensions, exposure time, detector temperature, right ascension, declination, etc. What’s more, you can now search for this information right from within Finder itself!

Creating a new library has been tweaked slightly, such that you don’t need to provide a name for it until you explicitly save it. A small change, but with it comes support for the Tabs feature of macOS Sierra, the next major version of macOS this fall.

There are disk space utilization optimizations, Virtual Observatory returns results faster, and Observatory now displays a notification whenever there’s an update on this Observatory Blog.

Loading and displaying images is up to 40% faster. This has steadily been improving over the last few releases as you can see in the graph below. The system-level support for RAW images is inherently slower than Observatory’s FITS handling, but there’s still room for further improvements.

Aside from that, you’ll see several other improvements in Virtual Observatory, importing, the sidebar, and more. For all the little details, you can head here.

When you have Observatory installed on your Mac, you’ll notice that all your FITS and SBIG files suddenly are displayed with proper thumbnails instead of generic icons in Finder. After selecting any of them, you only need to press Spacebar on your keyboard to see the full image.

It is a great feature, which also extends to the sheet presented when importing images into an Observatory library.

The next update of Observatory will deepen this kind of integration, by automatically extracting metadata from all your FITS and SBIG files, regardless of whether they are part of any Observatory library.

You can see the new metadata in Finder by selecting one or more files and choosing File ▸ Get Info (⌘I). 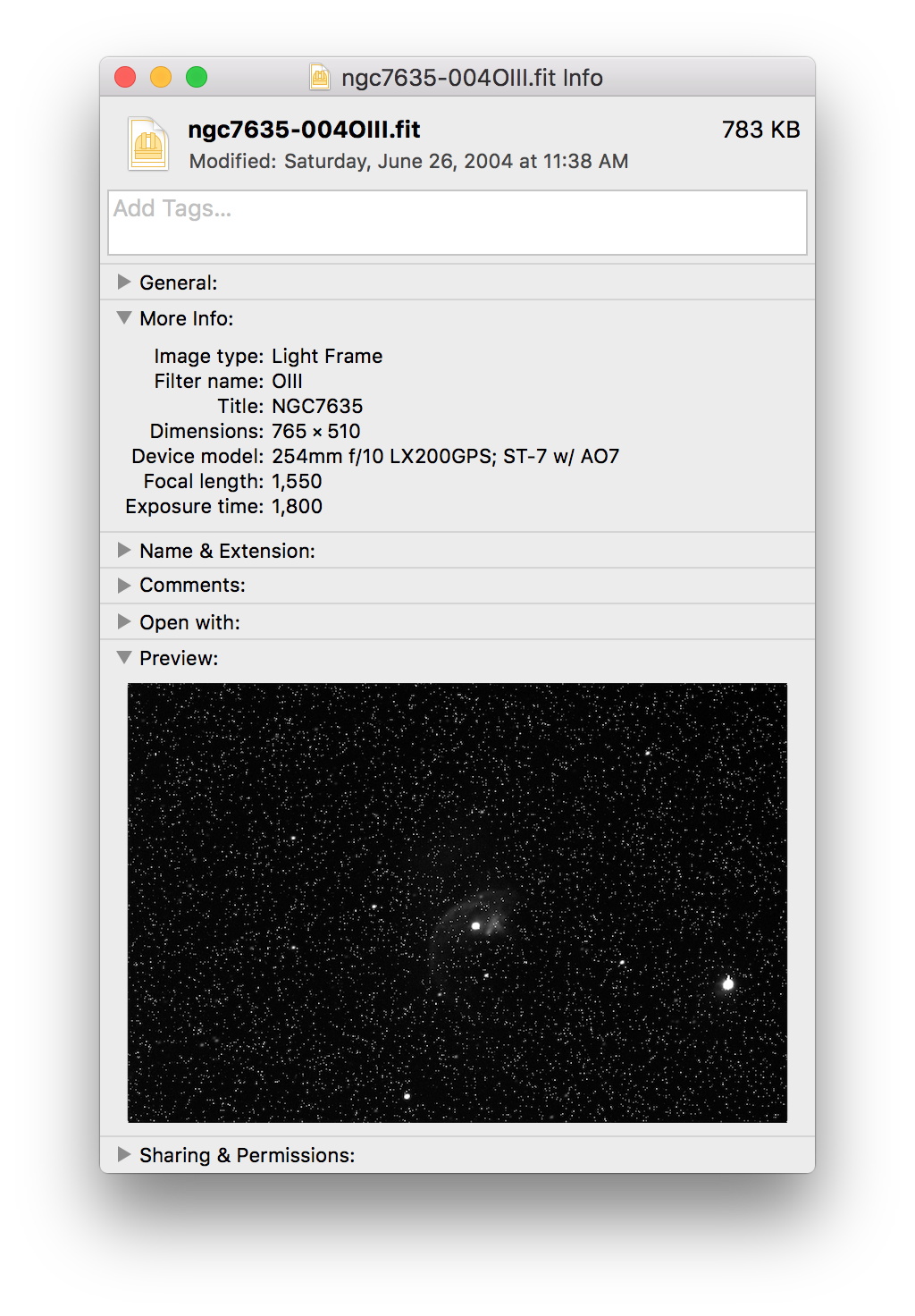 As you can see from the next screenshot, this metadata also greatly enhances the FITS and SBIG image search capabilities of your system. And if your images contain WCS information, you can now even look for those within a specific area of the sky, right from your Finder! 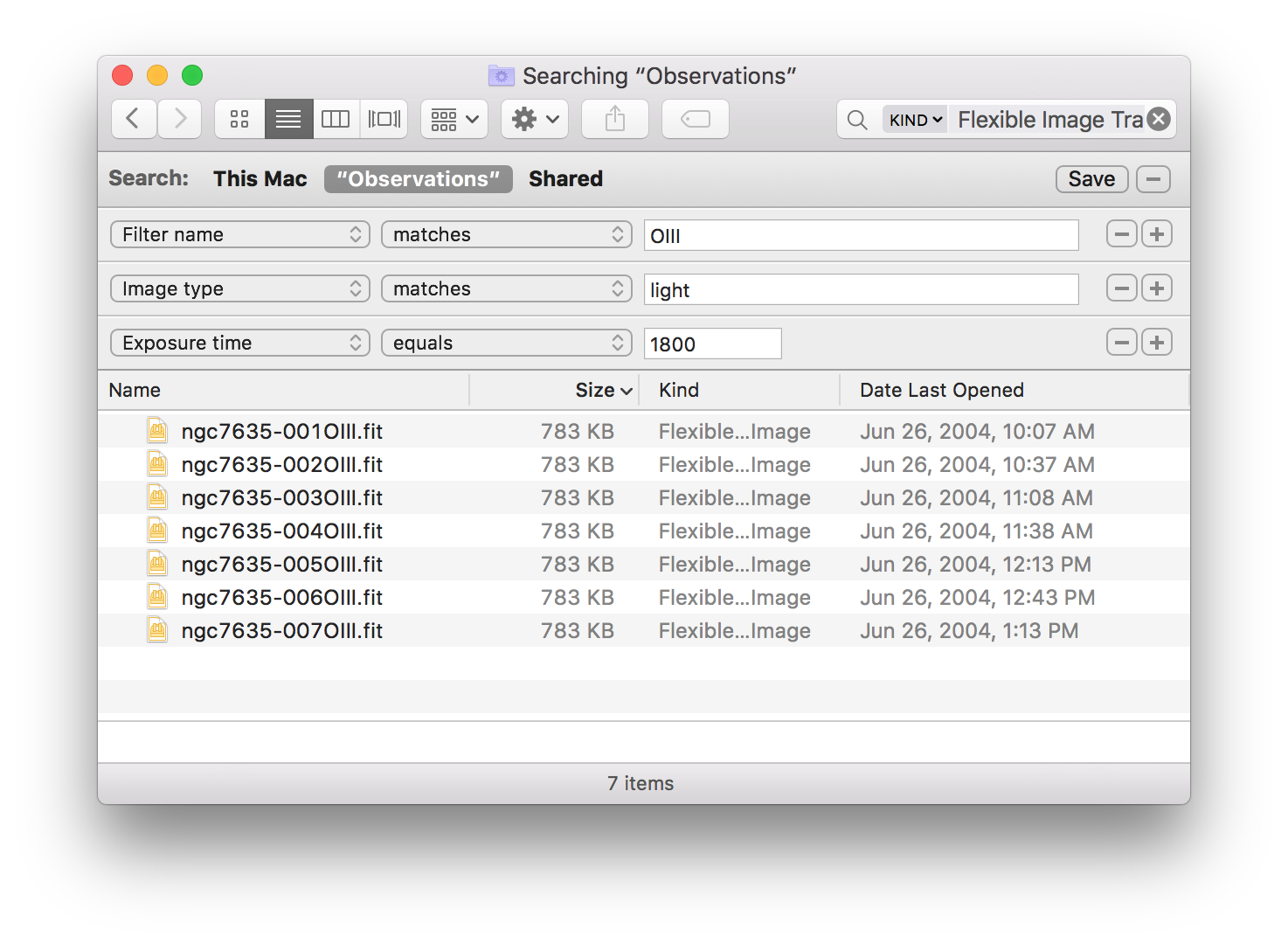 This is going to be a great update, with more optimizations and bug fixes, and it’s coming soon!